What matters (and doesn't) when getting press for your start-up 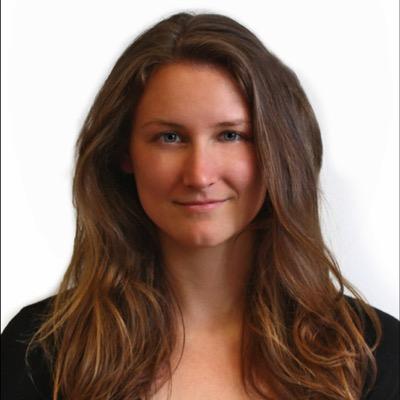 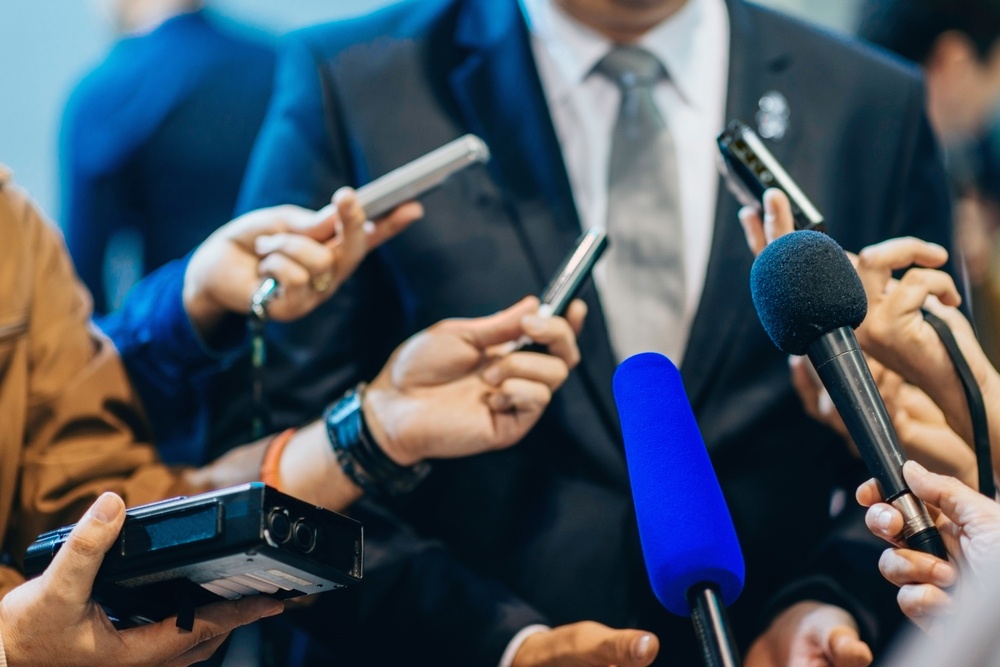 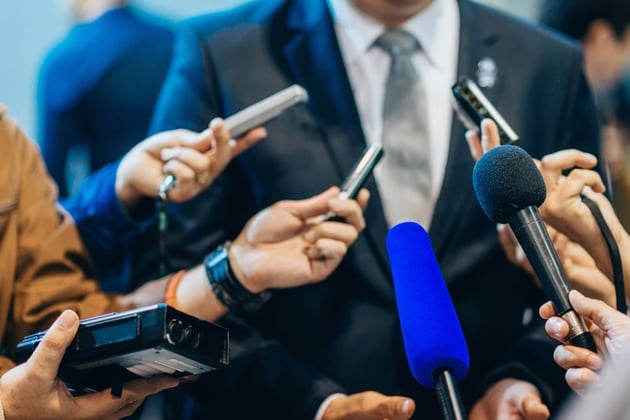 This guest blog post, 'What matters (and doesn't) when getting press for your start-up' was originally published on Medium and is printed here with the author's permission. You can follow the author on Twitter @gillianim or on Medium.

“I think you’re ready to be TechCrunched.”

I had just shown a friend the latest version of my app, Hitlist, an app that alerts you when flight prices drop for trips you want to take.

I’d never heard the term “TechCrunched” before but I could guess what it meant: to be written about in TechCrunch, the blog of record for the startup community.

Like many starry-eyed founders, I thought that if we built an amazing product users would come on their own, drawn like Redditors to a conspiracy theory. Sure, we hadn’t managed to attract or retain many users yet, but certainly when we nailed the product it would go crazy viral.

Three years in, I have one measure of how important press can be to a startup: $176,540. That’s the rough estimate of how much it would have cost to buy the Hitlist users we can directly attribute to press coverage (more on this below). This understates the total impact, as a good article continues sending traffic long after it’s published.

But not all press is created equal. Which ones should you target if you’re trying to drive maximum growth? I decided to find out.

I came across Noah Kagan’s quant-based marketing spreadsheet early in my exploration of marketing tactics. By looking at audience reach and expected clickthrough, you can decide which outlets to pursue. 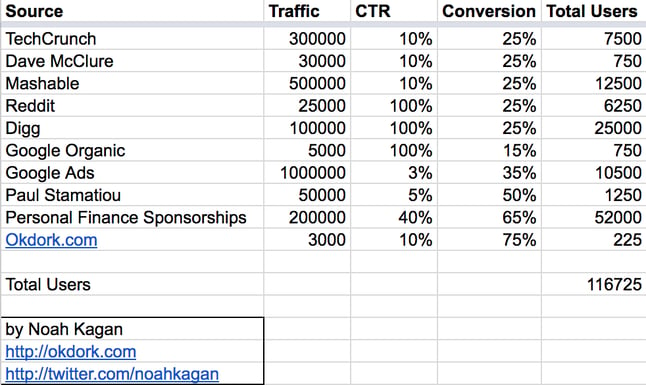 This framework works well if you’re making a web-based app. But I had no reference point for what outlets would actually drive downloads, not just impressions.

It’s surprisingly difficult to get information on this. With websites, you can see where your traffic originated in your analytics. With apps, you don’t have a digital trail for most of your downloads. People read about your app on their desktop or tablet and open up the App Store on their phone, or hear about it from friends, or discover it through App Store features or ads. For Hitlist, fewer than 10% of our downloads come from sources we can track.

However, we can infer where our users are coming from based on when they download. We’ve seen spikes in downloads when we’ve been featured in the App Store or when we’ve gotten a significant piece of press. Using this fuzzy logic, we can attribute 44,135 downloads directly to press.

Though this represents ~5% of our total user base, it’s still an important chunk of users that we got for ‘free’, in the sense that we didn’t pay for the download. Since incentivized downloads in the mobile travel space seem to retail around $4 per install, those 44,135 downloads would have cost us $176,540.

I built my own ‘quant based marketing’ sheet to retroactively track the boost in downloads we saw when a piece of press dropped, so we could figure out which journalists and outlets to pitch.

In total Hitlist has been written up in 1234 newspapers, blogs, and review sites as of April 1st, 2017. The vast majority of those mentions didn’t make a noticeable impact. Our downloads fluctuate 100+/- day to day so any boost less than that was not distinguishable from our usual numbers. When it comes down to it, there are 23 articles that have had a notable impact on our growth.

Our biggest spikes in traffic in the first two years came when we launched in November 2013 (The Next Web broke the story) and when we came out of beta in June 2014 (TechCrunch). After that, we didn’t see big pickup from any of the articles, even though some were from nominally higher-traffic publications… until Buzzfeed. 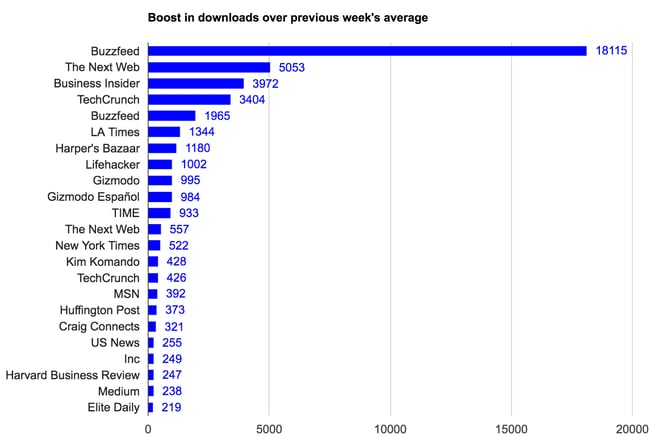 I’d heard rumors that Buzzfeed was great at driving traffic, but wasn’t expecting a jump of nearly 2000 new users — our biggest boost since TechCrunch’s ‘coming out of beta’ article in mid-2014 — when we were featured as #11 on a list of “21 Amazing Travel Apps You’ve Never Heard of” on May 1st, 2016. Three days later we were featured in “10 Life-Changing Things To Try in May.” We saw over 18,000 downloads that day alone. Buzzfeed’s audience size, demographics, Nicole Nguyen’s excellent copy, and our own promotion (more on that below) produced a perfect storm whose only casualty was our server bill.

What else did we learn?

The two articles that had the most impact as we were getting started were features about Hitlist specifically (launching and ‘coming out of beta’). Because of this, we tried pitching dozens of journalists on why they should write a feature article about us… and failed.

It’s almost like journalists don’t want to write fluff pieces about how awesome your app is absent any real news.

However, journalists love making lists. They’re easy to read and get shared more often. And, as it turns out, 68% of our total press downloads and 8/10 of our top performing stories have been lists. We’ve switched from trying to get journalists to write articles about Hitlist exclusively and now try and make sure it stays top of mind when they’re writing lists. 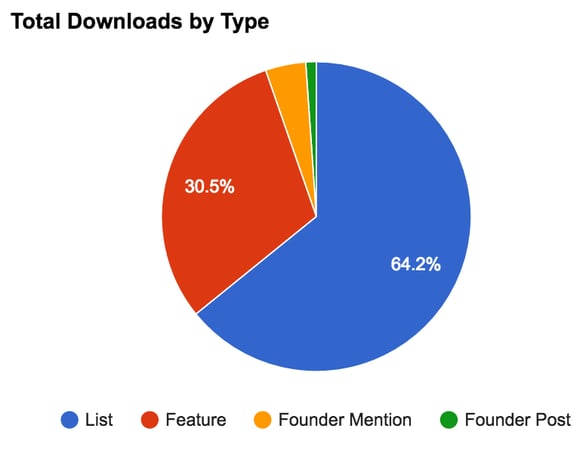 The person matters less than the product

I’m a female founder/CEO, which is sadly unusual. On the plus side, being unusual has helped us get featured in publications like Harper’s Bazaar and Huffington Post. However, pieces about the app tend to perform better than ones about Hitlist the app with a female founder.

In the one case where we’ve been able to A/B test features in the same publication, Business Insider, we saw 3972 downloads above average the day 23 iPhone-only Apps that will make your Android Friends Jealous was published, but The 39 Coolest Companies Founded by Women had a negligible effect.

While we know better than to generalize from one data point, the chart above supports the conclusion: while press featuring founders might be good for the founder’s ego, it’s not necessarily doing a lot for business.

Along the same lines, I’ve written a few posts about Hitlist, mostly on Medium and one that was published by Harvard Business Review. Neither drove more than a couple hundred downloads on the day they were published. However, my most popular Medium post has sent more traffic to our landing page than any other referrer besides Google, Facebook, and Product Hunt, so it’s likely had a long tail impact we can’t quantify.

A growth “expert” told me that if a press outlet won’t link to you they’re worthless. It’s true that the number and quality of links pointing to your website juices your SEO, but several of our biggest drivers of download spikes (Buzzfeed, New York Times, Gizmodo, TIME) didn’t have a link to our website. I wouldn’t shun an outlet just because they won’t link to you.

If you’ve got it, flaunt it

The day after we were TechCrunched, I shared the article about Hitlist on Hacker News. The early adopter tech community gave us some valuable feedback (we got rid of Facebook-only login, fast!) but also managed to drive so much traffic to the article that it ended up boosting the article to the homepage of TechCrunch, which then made it one of the most read articles of the week, which meant it was sent out in a newsletter to their millions of subscribers… which meant we got a lot more downloads over the course of a week than we would normally get from a piece of press that is only featured for one day (or less) on a website.

Thanks to that experience, we try and amplify every article that’s written about our product by posting it in various communities that might drive additional traffic.

We’ve spent very, very little money on marketing. One of the best ways we’ve found to stretch a dollar is promoting outside articles about Hitlist. We post the best performing articles to Our Facebook page and then ‘boost’ them with $$ to drive more visibility. These posts tend to perform much better than content we produce ourselves and then boost.

I know, call me Captain Obvious. But it’s worth pointing out that a boost of 200–300 users over our usual average was a big deal when we were getting a handful of downloads a day in the first year Hitlist was around.

Now that we’re getting 1000+ downloads a day organically, press doesn’t make as much difference — though we’ll take more of those Buzzfeed posts any day.

Furthermore, coverage begets coverage, so getting good press early and often can have an exponential effect over the course of a product’s lifetime.

At the end of the day, none of this will matter if you don’t build a good product.

Without product-market fit, you’re going to lose your users as fast as they show up. All the press in the world won’t help you if you’re just putting lipstick on a pig.

That being said, product-market fit doesn’t spontaneously generate in a vacuum. You need users to help you figure out whether you’ve got something of value. Getting TechCrunched (or even better, Buzzfeeded) can bring you the insight you need to build a product that will go crazy viral — or at least one that will grow steadily for years to come.

Tip #14:  While getting press for your start-up can be powerful in generating user interest and responses in relation to your business or product, it's vital that you then use that user interest to inform how you develop your product and services to ensure they are relevant in the years to come.

If you would like to learn more about differentiating your product, hacking your own PR and understanding the influence of the News Media, please see these links below:

Product & Marketing Differentiation: Put a goat in a tree!

Dear Tech Bros: Some advice for hacking your own PR

Understanding the influence of the News Media